Have you ever tried a Staffordshire Oatcake? February with its cold winds and chilly days,  is a time to eat wholesome, local and tasty food. The humble Oatcake is one if the very first fast foods!!   Our local  Denstone Hall farm shop sells them in the cafe or to buy from the shop! I pick a packet up at the Post Office in Rocester, they are delicious and so versatile. More about that later! 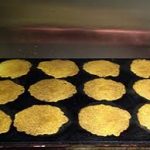 Staffordshire Oatcakes are the original Potteries fast food! Dating back to at least the 18th Century when the Oatcake was the staple diet of the Potteries folk. It is thought  that during the long hard winters, farmers grew oats rather than wheat and their wives would bake them on a bakestone for family and farm workers. At that time, they were possibly eaten with lard, fat or cheese.

During the 19th Century an oatcake cottage industry sprang up. Many men and women worked in the pottery factories around stoke, and the older women would take over the baking of the Oatcakes, often baking more than what they needed and sold them from their wicker baskets in the markets and streets of Stoke.

In the 20th Century many bakers had built brick rooms in their yards where they baked the Oatcakes and they sold them from their sash windows at the front!

But by the late 1960’s people had more money, public transport improved, and the car was available to many more local people.  Supermarkets  sprang up, and suddenly people had many more exotic foods to try.

Sadly, this had an adverse effect on the humble Oatcake shop and as bakers retired, less people were interested in taking over the Oatcake shops from the previous generation. For 40 years there was a steady decline.

Oatcakes for breakfast, lunch or tea!

Fast forward to the present day, however and there has been an Oatcake revival! People are more interested in local produce, where their food comes from, how it is made and if it is fresh.

Here are some of my favourite ways of  preparing & eating Oatcakes! 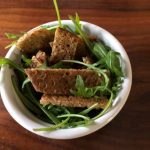 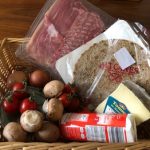 Ideas for topping your oatcake

Use a non stick pan and heat over a medium heat, add the oatcake and dry fry it till it is crispy! Turn over and repeat on the other side, you can add pepper or any spices/herbs before you turn the cake, and add a little vegetable oil if required. Once crispy, slice the oatcake into  shreds and use as an accompaniment for  grilled chicken, fish pie, on top of salads etc.

Cook the oatcake the same way as above, but use it like a pizza base ie flat  and add  cheese, mushrooms,  bacon, fried egg, tomatoes, you can then grill this if preferred, etc to make up your own tasty dish, and enjoy!